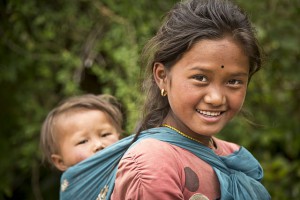 Social protection is essential in preventing and reducing poverty for children and families, in addressing inequalities and in realizing children’s rights. Despite recent progress in many parts of the world, too many children live in poverty and are deprived of their most elementary rights. In, fact, in most parts of the world, children and families with children are at greater risk of poverty than other groups of the population, with respect to both monetary and other forms of poverty.

The consequences of poverty are very significant for children. Children experience poverty differently from adults; they have specific and different needs. While an adult may fall into poverty temporarily, a child who falls into poverty may be poor for a lifetime – rarely does a child get a second chance at an education or a healthy start in life. Even short periods of food deprivation can be detrimental to children’s long-term development. If children do not receive adequate nutrition, they lag behind their peers in size and intellectual capacity, are more vulnerable to life-threatening diseases, perform less well in school, and ultimately are less likely to be productive adults. Child poverty threatens not only the individual child, but is likely to be passed on to future generations, entrenching and even exacerbating inequality in society. Many of the 18,000 children under the age of five who die every day, mainly from prevent­able causes, could be saved through adequate social protection. Where children are ­deprived of a decent standard of living, access to quality health care, education and care, and where they suffer from social exclusion, their future is compromised. Where children are forced to engage in child labour, such exploitation takes a heavy toll on their physical and cognitive development, and on their future life chances. Child poverty affects not only the well-being and aspirations of individual children, but also the wider communities, societies and economies in which they live.

Photo credit: “The Human Side of the Nepal Crisis | Le côté humain de la crise au Népal” by DFTAD|MAECD (CC BY 2.0 via Flickr).

Few people would disagree that children need protection and support, and that they should receive priority in policy interventions, including social protection. These beliefs are underpinned by the 1989 Convention on the Rights of the Child (CRC), which has been ratified by 192 of 195 of the world’s countries. In the past decade, social protection […]

Are Conditional Cash Transfers Having an Impact on Achieving Access to Education? Some Answers from Argentina

The impact of Argentina’s Asignación Universal por Hijo Cash Transfer Programme on the right to education The conditions of poverty and exclusion that affect a great part of Latin America have led governments to create various social security programmes, directed primarily at the most vulnerable families and communities. Several governments, including those of Argentina, Colombia […]

Child and family benefits, in cash and in kind, play a particularly important role in realizing children’s rights and addressing their needs, particularly for the most vulnerable members of society. Evidence from many parts of the world demonstrates that social protection benefits have led to a marked improvement in children’s nutritional status. Cash transfer programmes […]

Chapter 381 of the Child Care Board Act of Barbados makes better provision for the care and protection of children.

An act to provide for the establishment and functions of a Childcare and Protection Agency, the licensing of childcare facilities, the maintenance of appropriate standards in respect of their operations and for other matters relating to the safety, care and protection of children.

Convention on the Rights of the Child Article 26 recognizes for every child the right to benefit from social security, including social insurance. In addition, Article 27(1) recognizes the right of every child to a standard of living adequate for the child’s physical, mental, spiritual, moral and social development. Under Article 27(2) and (3), States […]

The Right of Children with HIV to Privacy in Kenya

Summary: This case concerns a directive issued by President Uhuru Kenyatta ordering the collection of data and the preparation of a report pertaining to school-going children, guardians, and expectant and breastfeeding mothers living with HIV. The High Court of Kenya at Nairobi found this action to be in violation of the rights to privacy and […]

This case addresses the plight of as many as 100,000 children (known as talibés), who while attending Qur’anicschools (daaras) in Senegal, are forced by some instructors to beg in the streets, to secure their own survival and enrich the teachers. The children live away from their families, often in deplorable conditions, and are exposed to […]

Nature of the Case The case was brought on behalf of a pregnant woman who died in a hospital while awaiting obstetric care. It considers whether the hospital failed to provide appropriate obstetric care and management, thereby violating her rights as well as those of her surviving children. Summary On May 5, 2011, Irene Nanteza […]

The communication was filed with regards to the alleged forced sterilization of an ethnic Roma woman by medical staff pursuant to an emergency caesarian section that was required to remove a deceased fetus. The Committee found that previous medical care, the poor medical condition of the victim, A.S., upon arrival at the hospital, short time […]

Realizing Children’s Right to Social Protection in the Middle East and North Africa: a compendium of UNICEF’s contributions

This Compendium documents the broad range of UNICEF’s social protection interventions in MENA from 2014-2017. The Compendium illustrates how UNICEF has worked hand in hand with partner governments in both humanitarian and development settings and succeeded in reaching the most vulnerable children with social protection mechanisms. Thetimeframe selected represents UNICEF’s previous global Strategic Plan, which included social inclusion and social protection as […]

Towards the Urgent Elimination of Hazardous Child Labour

Through the definition of the targets of the Sustainable Development Goals (SDGs), countries have acknowledged the importance of social protection for poverty reduction. Namely, target 1.3 of SDG 1, “End poverty in all its forms everywhere”, calls for the implementation of nationally appropriate social protection systems and measures for all to achieve substantial coverage of […]

Girls’ Rights are Human Rights: An in-depth study of the status of girls in the international human rights framework

Girls’ rights are human rights. Yet, millions of girls continue to struggle to claim their rights. Girls are disproportionally disadvantaged in education, health, work and family life – particularly in the world’s poorest countries. When factors like poverty, ethnicity or disability intersect and where gender stereotyping and unequal power relations prevail, girls’ disadvantage is magnified. […]

Plan International has developed the Girls’ Rights Platform to help NGOs, young activists, diplomats, UN agencies, and academia bring girls from the margins to the centre of the international agenda. This platform offers a number of innovative tools, including the world’s most comprehensive human rights database, training tools for girls’ rights advocates, and a UN […]

Global Goals for Every Child: progress and disparities among children in South Africa.

This report presents an analysis of progress and disparities among children in South Africa. Data show significant progress during the past two decades in areas such as child poverty, child survival, mother to-child transmission of HIV and primary school attendance, among others. These are impressive achievements, but they are only part of the story. Stark […]