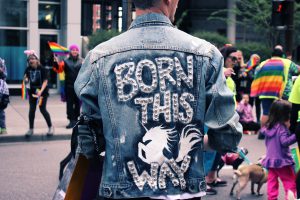 Lesbian, gay, bisexual, transgender, queer and intersex (LGBTQI) persons face specific obstacles when it comes to accessing many of their rights, including their right to social protection.

The terms lesbian, gay, bisexual and pansexual refer to people’s sexual orientation, that is, who they experience sexual attraction towards; while transgender refers to gender identity, that is, “someone whose gender differs from the one they were given when they were born”. Terms like genderqueer and non-binary refer to people who fall outside the construction of gender as male or female. Intersex people are born with physical or biological sex characteristics such as reproductive or sexual anatomy, hormones or chromosomes that do not seem to fit the typical definitions of female or male.

This is not an exhaustive list of terms: different cultures, both historically as well as today, have used diverse language which express the wide range of sexual orientations and gender expressions, such as “Two-Spirit”, which refers to Native American and First Nations people who fall outside Western gender norms, while “hijra” typically refers to South Asian individuals who were assigned male at birth, but identify as women or as a third gender.

LGBTQI people are entitled to the enjoyment of all the rights outlined in international, regional and domestic human rights law. Yet, due to strongly held cultural and social norms surrounding gender expression and sexuality, LGBTQI people are often excluded. The International Lesbian, Gay, Bisexual, Trans and Intersex Association (ILGA) recognizes this, stating that “social and legal discrimination on the basis of sexual orientation, gender identity and expression, and intersex, is pervasive”.

However, recently, some nations have passed legislation to help protect some of these communities’ and individuals’ right to social protection. A human rights-based approach to social protection, and the development of social protection floors, can transform the lives of LGBTQI people, helping making all societies inclusive ones in which all members fully participate, and in which no one is left behind.

This act recognizes the gender of a person and regulates the effects of such a change, as well as the recognition and protection of the sex characteristics of a person.

This brief outlines transgender and gender-noncomforming person’s rights at work.

This tool describes how services can be designed and implemented to be acceptable and accessible to transgender women. To accomplish this, respectful and ongoing engagement with them is essential. This tool gives particular attention to programmes run by transgender people themselves, in contexts where this is possible. It is itself the product of collaboration among […]

These guidelines aim to address these disparities by equipping primary care providers and health systems with the tools and knowledge to meet the health care needs of their transgender and gender nonconforming patients. Link to Guidelines

How does social protection address the needs of lesbian, gay, bisexual and transgender people? How can a rights-based approach be used to ensure that their needs are fully taken into account? In this video, Andrés Scagliola from the Social Development Department of the City of Montevideo discusses challenges and successes in mobilizing human rights instruments […]

How can governments fulfil their obligation to provide social protection and respect the rights of all? Andrés Scagliola from the Government of the City of Montevideo, Uruguay, describes his experience developing and implementing policy that safeguards lesbian, gay, bisexual, transgender and intersex (LGBTI) people’s right to social protection.